“Global Value Chains can be a path for economic development if India implements deeper economic reforms to support manufacturing sector, consolidate its strength in the services sector and cooperate with foreign countries on issues beyond trade. Reforms such as a liberal trade policy, conducive land and labour laws are needed to attract manufacturing investments. India needs to consolidate its strength in the services sector by upgrading its higher education and skill development. Thirdly, India needs to cooperate with foreign countries on issues such as taxation, competition policy, data protection and others.” said Dr. Aaditya Mattoo, Chief Economist, East Asia and Pacific Region, World Bank at an Interactive Programme on first-ever release of World Bank’s World Development Report 2020 ‘Trading for Development in the Age of Global Value Chains’ in Mumbai.

Emphasising on labour reforms, Dr. Mattoo said, “Only 10% of firms in India employ more than 500 people as majority of the companies do not want to expand their operations because of regressive labour laws. In countries like China, the number of firms employing more than 500 workers is three times as large as India.”

Dr. Mattoo also suggested Government of India to enter into agreement with foreign countries on data privacy regulations, on the lines of the deal between USA and EU. This will promote cross-border flow of data and information among countries, which is the life blood of global value chain.

Highlighting the importance of skill upgradation, Dr. Mattoo pointed out how China started manufacturing domestically the tip of ball point pen by mastering the technology of high precision engineering. He informed, “A few years ago, China was dependent on imports from Japan and South Korea for the tip of ball point pen as it did not have indigenous technology to produce it. However, in the course of time, the country acquired this skill and started producing this product domestically.” This tip is used in the production of ball point pens, which China exports USD 38 billion annually.

Speaking about India’s trade performance, Dr. Mattoo remarked, “While world trade has performed badly in recent years, India’s performance has been worse. India’s trade to GDP ratio has fallen 13% from 56% in 2012 to 43% in 2018. India, which has a low share in world exports, cannot blame the weak global environment for poor performance in its exports. India’s underachievement in excelling in basic manufacturing is the reason for the country’s poor share in world exports.”

Mr. Rastogi remarked that India will gain from Global Value Chains only if it shifts its focus to high end manufacturing products by adopting cutting edge technologies and innovation.

Mr. Rastogi pointed out that a lot of innovation and business growth is happening in the unlisted corporate sector, including start-up enterprises, which attracted a record USD 11.5 billion in 2019 from private equity and other venture funds.

Earlier in his welcome remarks, Mr. Vijay Kalantri, President, All India Association of Industries said, “Government of India must improve ease of doing business by simplifying legislations and tax procedures. Complex regulations increase the compliance burden of the industry, thereby rendering it uncompetitive in the global market. Simple legislations and low tax rates promote investments and economic growth. All legislations must be designed after comprehensive discussion with stakeholders to avoid complications at the implementation stage.”

On the taxation front, the government needs to eliminate multiplicity of taxes and reduce GST rates to 14%, which is the average rate across countries that have implemented GST. Empirical evidence suggests that low tax rates leads to increase in tax base and buoyancy in tax revenue.”

Mr. Kalantri also suggested government and Reserve Bank of India to infuse liquidity into the industry through banks to promote consumption-led economic growth, as of today banks have become recovery banker than lender

Ms. Rupa Naik, Senior Director, MVIRDC World Trade Center Mumbai proposed vote of thanks for the event. She suggested Government of India to establish institutional mechanism for investor aftercare to facilitate new investors to navigate through administrative procedures. Similarly, there is a need to address the constraints facing India’s agriculture sector, MSMEs, start-up enterprises and women entrepreneurs, who contribute significantly to economic growth, but suffer from lack of access to credit and business support services.

The programme was attended by consular corps, members from trade & industry, academia, financial institutions and other stakeholders. Meghnad Desai Academy of Economics partnered with MVIRDC World Trade Center Mumbai for the event. 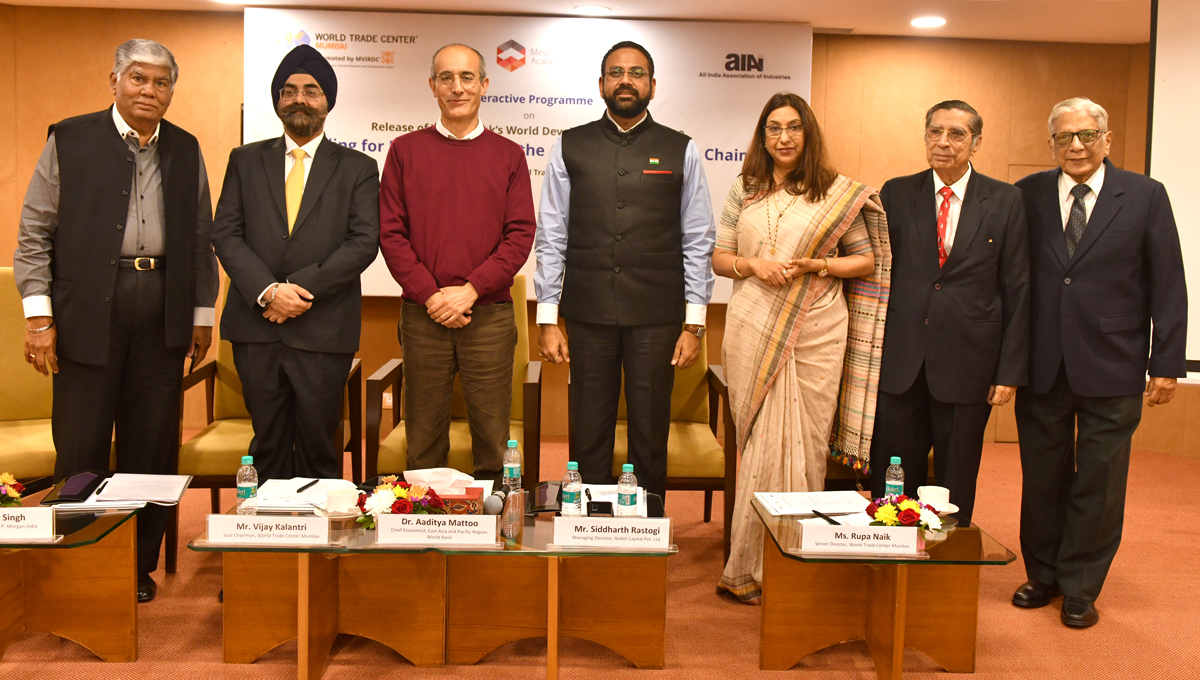